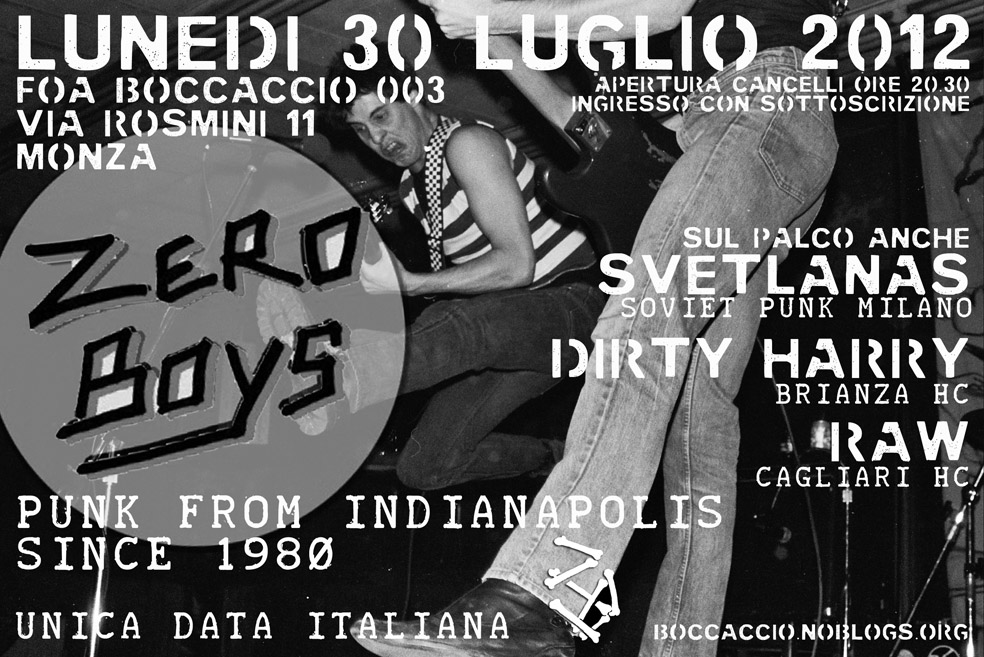 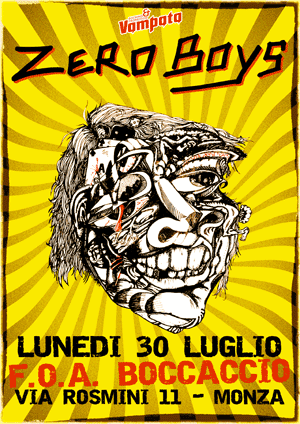 punk legends from Indianapolis since 1980

Their first release, Livin’ in the ’80s, was a 7″ EP released by the band on their home-brew Z-Disc label. Their debut full length album, Vicious Circle, was released in 1982 with its distinctive bright yellow cover on the local label Nimrod Records. Many punk fans nationwide expressed surprise that a band like the Zero Boys originated in the Midwest; their polished intensity suggested the larger and more established scenes in Los Angeles, Washington DC, New York City and elsewhere. Indeed, their 1982 “Hell Tour” appearance at The Barn in Torrance, CA (with roadies Gary X Indiana and Marvin Goldstein in tow), on a bill with the Dead Kennedys and Minor Threat, demonstrated that the Zero Boys were a Midwestern punk rock force to be reckoned with.

The intelligent, ambitious lyrics of “Vicious Circle” tackled such themes as social stratification, teen angst, and political corruption. Mahern’s clear tenor voice emerged like a rapid-fire war cry, well-suited to the message and material. These themes, set into a blazing, sonic buzzsaw with huge choruses and intricate changeups, set an influential stylistic precedent for hardcore punk which still resonates today.

Vicious Circle was reissued on Toxic Shock later in the 1980s, with added bonus tracks taken from the Affirmation Records compilations LPs The Master Tape and The Master Tapes 2. It was reissued again in 2000 by Lookout! Records, without the Master Tape tracks, but with two additional songs from the original album sessions, “She Said Goodbye” and “Slam and Worm”, which had been given limited release on a 7″ single.

It has occasionally been reported that the band never recorded further material after this. This is true only in the sense that the lineup of the band that made Vicious Circle never recorded new material. After David Clough left the band to join Toxic Reasons, the Zero Boys did manage to record a handful of tracks intended for a second LP, but broke up before the album could be finished. These tracks were released on the History of the Zero Boys cassette on Affirmation, along with the above mentioned compilation tracks and other demo tracks and outtakes.

Around 1990, Selfless released a 7″ single featuring the Zero Boys on one side and Toxic Reasons on the other. The Zero Boys reformed in late 1987 with guitarist Vess Ruhtenberg and recorded two further albums, Make It Stop (released on Germany’s Bitzcore label in 1992) and The Heimlich Maneuver (released on Skyclad in 1993.) In 2009, Secretly Canadian reissued both “Vicious Circle” (identical to the Lookout! edition in content and artwork) and “History Of”, making the latter available on CD for the first time (appending the Livin’ in the 80s EP, but omitting four tracks from the original cassette which had appeared in different recordings on Vicious Circle.)

In the last couple of years, the band has reunited for the occasional gig, including a series of shows at CBGB’s designed to raise money to help keep the club open, and a series of shows in 2006 where they performed the entire Vicious Circle album. They are also headlining a two day show at No Way Fest in Richmond, Virginia on June 20 and 21 2009. Paul Mahern went on to form the power pop band the Datura Seeds and has since become a producer in Bloomington, Indiana, where he also teaches yoga and owns the Affirmation Records label. Clough owns a punk clothing store in Indianapolis called Future Shock[1] as well as a progressive music bar named Radio Radio. Mark Cutsinger continues to be an active drummer in the midwest and Vess Ruhtenberg plays guitar in The Pieces, The United States Three (Ruhtenberg’s other band with Cutsinger), and Bass with The Lemonheads. Zero Boys are to play Rebellion Festival in Blackpool in 2012 on the Empress Ballroom on the Friday along with two other newly reformed punk bands who are two UK82 legends Anti-Pasti and The Fits.